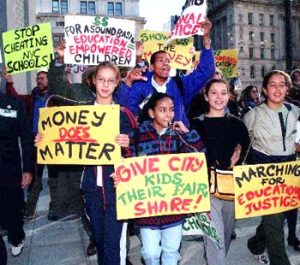 When I walk towards my dilapidated school, I see a condemned building sharing our parking lot.  Once inside, I notice the old, rusty windows that let rain seep through during storms covered in white cages that make the school look more like a prison.  As I walk towards my room, I notice that many rooms lack basic technological needs.  Many do not even have technology at all.  We have three SMART boards in the entire building.  One teacher was told that she would have to share the board with the other teacher in her grade.  Well, she opted to not have technology since it is difficult to move kids throughout the learning block in between two classrooms just to use that advanced piece of technology.

Moreover, once inside my room, I notice that curricular and planning materials are sparse so I spend countless hours creating everything:  worksheets, copies of texts, and the list goes on.  I think the number one enemy to the environment may very well be a school.  So while money may not be everything, as a teacher in a turnaround school in the poorest section of Washington, D.C. each day I’m confronted with what high expectations coupled with little funding can produce.  If it was not for outside efforts to help with costs, many improvements to our school building, additions to staff, and even our new family engagement initiative would not be possible.

I am the first to admit that simply throwing money at a problem does not make it go away.  However, that does not mean that money is not a necessity.  If this were the case, schools would not be trying to create foundations or apply for grants to supplement the costs.  Teachers would not have to use sites like Donors Choose for school supplies.  One thing that makes the charter school movement so successful is its ability to raise private funds.  Money is vital to the education reform movement.

Moreover, funds used properly will support schools in fully funding programs that work, ideas worth exploring, buildings up to code, and staff to meet student needs, among other things.   However, The Washington Times recently reported the findings released by the U.S. Department of Education that prove that money is not being adequately distributed across schools–specifically wealthy and low-income schools.  Below is an excerpt from the piece:

Loopholes in federal education law have allowed districts to funnel more state and local money to wealthy schools at the expense of their low-income counterparts, according to a new report released Wednesday by the Education Department.

More than 40 percent of low-income schools don’t get their “fair share,” the report says, despite federal requirements that districts spend “comparable” amounts of money at poorer schools eligible for Title 1 funding.

You can read more here.  I hope the Federal government works urgently to correct the law.  The framework that schools and districts must work within leads the degree in which education can serve as “the great equalizer.”   What are your thoughts?

Each child is born with special talents to give to the world that are developed through a supportive community and quality school system. Currently, our nation is producing adults who are walking around with no sense of purpose or life fulfillment. Join me as I unite with other people in reforming America's public schools and empowering our nation's youth to find and live their purpose in life. Feel free to comment, debate, give suggestions, and most importantly join me in creating solutions.

Connect with me on LinkedIn